Not sure I can get behind this proposal by Amazon’s Drone Project to further divide the sub-500 foot of shared airspace. RC hobbyists flying planes, helicopters and now drones have always been able to fly up to 500 feet. While it is a good thing that Amazon Prime Air is starting the conversation on drone airspace, I’m not a fan of Amazon’s proposal which is basically “low budget drones must be below 200 feet”.

Welcome to the drone party new-guy-Amazon, but as a refresher, I should mention it was hobbyists’ innovation with RC aircraft that created the drone revolution in the first place! This solution doesn’t fly with us:

If I want to park a fleet of medium altitude drones over my farm to monitor irrigation, who are you to tell me to stay below 200 feet?

I do agree with this comment from the article:

“In the United States, there are approximately 85,000 commercial, cargo, military and general aviation flights every day,” Amazon said. “This number is likely to be dwarfed by low altitude [unmanned drone] operations in the next 10 years.”

Innovation will be stifled if the people can’t operate in the traditional sub-500 foot zone. We don’t all have octocopters like this Amazon PrimeAir Drone.

No question, your video on Amazon PrimeAir is cool.

Now how about playing nicer and coming up with drone flight standards so small and large players can work together. Because this is cool too.

And delivery isn’t the only use for drones as evidenced by this chapter in the book Drones for Dummies. The screen shot below is of a golf course taken by my drone a while back. And I was standing at the top of a hill.

Was I over 200 feet when I took that photo? That depends on if you measure from the altitude of the first hole or the hole I was at when I launched the drone. GIS is not reconciled on a flat plane.

Maybe the goal of a drone flight is to capture a video of work of art before it gets torn down. Let’s hope the artists keep their work small instead of creating a vortex through an entire house. Er… wait. Too late. 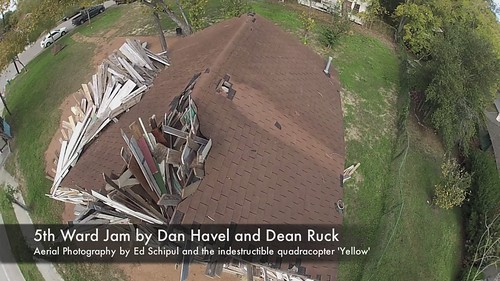 All I’m saying is that it isn’t that simple Amazon. You can’t chop up the 500 foot air space when it is already too small. Think bigger. For example

The waterways are flat after all, and yet somehow big and small boats are able to navigate together just fine using a few rules of the road. (Alternatively we could disrupt commerce if we wanted to by requiring any boat less than 100 feet long to actually be a submarine. There is that option I suppose.)

My point is it can be done without being a bully about it.

Now, I’m off to start a kickstarter for help launching my Faraday Cage Drone Catcher.  It is a “10 foot diameter faraday cage blanket meant to be thrown over a drone to safely disable it and stop all communications with remote controllers.” The Faraday cage blanket would enable selling Amazon drone parts on the black market. How? Well, first you buy the faraday-blanket, then wait for a neighbor’s Amazon PrimeAir delivery. Then you run in and throw a blanket on the drone. Part it out undetected. Voila!

I mean, how else are we to afford the fancy electronics needed to fly in what used to be our air space? And surely nobody has thought of catching drones like we catch cows in Texas – a cross between a lasso and frisbee golf called the Faraday Drone Catcher. We can organize events – call them “Catch a Drone Day” and redistribute the parts to poor rural areas after flashing the electonics. #heh